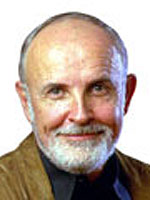 There are three fundamental principles for the Prevail scenario:

1. The future is not predictable; uncertainty trumps technological determinism. Prediction is a fool’s errand. That’s why we need multiple scenarios to navigate the future.

2. Connectedness is crucial: “a gradual ramp of increased bridging of the interpersonal gap.” I share with Howard Rheingold the belief that our technologies can serve rather than substitute for fleshier connections. But I agree with Jaron Lanier that eternal vigilance is called for to assure that the design and execution of our social networking technologies not lead us astray toward bogus connectivity.

3. We can achieve social transcendence by expanding the radius of empathy, but not so far as to include all living things.

Let me expand especially on the third: Empathy is essential. And compassion. But Jaron Lanier is also right to hold out for the creativity of innovative individuals—artists, poets, scientists, musicians.

One of the most challenging aspects of the Prevail scenario lies in navigating the narrow pass between too much individualism on the one hand, and too much collectivism on the other. We tend to think in binary terms: A or non-A. But the Prevail scenario calls for a more complex path: Not the One of hyper-individualism, not the All of Communist collectivism, but the less precise Some of limited community.

The radius of empathy cannot extend into the infinite. You can’t “friend” billions. Nor can it contract to the precious self of solipsism and narcissism. Is there an ideal size to the Some of a thickly empathetic community? No. And that’s part of what makes this idea of “Not One, not All, but Some” so intractable and intellectually unsatisfying.

But, hey, that’s life. Some communities will contract too far toward the exclusivity of we precious few. That way lies tribalism. Some communities will seek such broad inclusivity that their specialness will be leveled out and homogenized. We’ll lurch from the too small Some to the too large Some and back again because there is no ideal number.

This is why Joel Garreau has to describe the Prevail scenario as a series of “fits and starts, hiccups and coughs, reverses and loops—not unlike the history we humans always have known.” Its trajectory will not follow a downward deterministic curve toward oblivion. Nor will it carve an ascending arc toward an asymptotic approach to the Singularity. Instead it will look rather more like a pubic hair.

Jay Oglivy is the author of “Creating Better Futures” and is one of the founders of the pioneering scenario-planning firm Global Business Network.