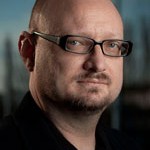 I have in front of me a late 1960s advertisement from the Burroughs Corporation. It shows a sketch of a guy — in a snappy suit and crisp haircut — sitting at what one must assume is a Burroughs business computer. A large genie-like figure billows from the machine, and the caption reads “MAN plus a Computer equals a GIANT!”

I love this image, despite the outdated sexism. It’s a healthy reminder that the notion of computers making humans something supremely powerful (and distinctly no longer human) isn’t just an idea dreamt up in the heady days of the 1990s, as Moore’s Law seemed to be really taking off. It’s been woven into the fabric of our relationship with “thinking machines” for decades. While there may have been no Mad Men-era Singularitarians fantasizing about being uploaded into a B6500 mainframe, it was clear even then that there was something about these devices that went beyond mere tool. They were extensions not of our bodies, but of our minds.

Of course, anyone sitting down at a 1960s Burroughs business machine right now expecting to become a figurative “giant” is in for a surprise. It may be something of a cliché at this point to note that a cheap mobile phone has far more computing power than a mainframe of a generation or two ago, but it’s true. Yet instead of making us all “giants,” our information technologies played something of a trick: they made us more human. All of the things that humanize us — love, sex, despair, creativity, sociality, storytelling, art, outrage, humor, and on and on — have been strengthened, given new power and new reach by the march of technology, not discarded.

But these two ideas ultimately tell the same story: by positing these changes as massive forces beyond our control, they tell us that we have no say in the future of the world, that we may not even have the right to a say in the future of the world. We have no agency; we are hapless victims of techno-destiny. We have no responsibility for outcomes, have no influence on the ethical choices embodied by these tools. The only choice we might be given is whether or not to slam on the brakes and put a halt to technological development — and there’s no guarantee that the brakes will work. There’s no possible future other than loss of control or stagnation.

Such perspectives aren’t just wrong, they’re dangerous. They’re right to see that our information technologies are increasingly powerful — but because our tools are so powerful, the last thing we should do is abdicate our responsibility to shape them. When we give up, we’re simply opening the door to those who would use these powerful tools to manipulate us, or worse. But when we embrace our responsibility, we embrace the Prevail scenario.

To Prevail is to accept that our technological tools are changing how our humanity expresses itself, but not changing who we are. It is to know that such changes are choices we make, not destinies we submit to. It is to recognize that our technologies are manifestations of our culture and our politics, and embed the unconscious biases, hopes, and fears we all carry — and that this is something to make transparent and self-evident, not kept hidden. We can make far better choices about our futures when we have a clearer view of our present.

To Prevail is to see something subtle and important that both critics and cheerleaders of technological evolution often miss: our technologies will, as they always have, make us who we are.

Human plus a Computer equals a Human.

Jamais Cascio is a founder of Worldchanging.org, and author of “Hacking the Earth.” Prevailing for him involves seeing technologies as expressions of ourselves, not alterations or degradations of human nature.