Stop trying to slap that cigarette out of someone’s mouth and instead thank them for smoking.  Smoking may cause cancer, but smokers are telling us how to beat it.

What if that glass of wine last night and the Starbucks you had this morning actually affected how your genes were expressing themselves?  What if your latest diet program could affect the metabolism of your future children?  These are the questions posed by the wild world of epigenetics – the branch of genetic research investigating how our everyday environment can actually affect how our cells read our genes.  The discoveries being made by researchers and scientists on the epigenetic frontier herald a revolution for our understanding of medicine and human health.

Think of your DNA like an instruction manual which each of your cells must read in order to correctly perform their function.  The instructions in this DNA manual are broken up into instruction sets called genes.  Different genes tell your cells to do different things and the process of reading and executing those instructions is called expression.  The result of expression is a gene product such as a protein or RNA.  Epigenetics effects how our cells read genes by making genes more or less likely to be read, therefore affecting expression and hence the amount of cellular gene products.  There are several mechanisms by which epigenetic changes occur.  Of these mechanisms, the most common and studied is DNA methylation which is a chemical alteration to the DNA molecule itself.  This is significant because the type and amount of gene products floating around in your cells is linked with things like Alzheimer’s and cancer.  Hence, things in the environment that cause epigenetic changes in the human epigenome may also carry the risk of producing disease.  If these epigenetic changes are detectable and linked to particular pathologies like cancer, then it becomes possible to predict and perhaps prevent the onset of disease at an earlier stage than ever and long before the emergence of traditional physical symptoms – and smoking is one of those things which produce all sorts of detectable epigenetic change.

In England, a team led by Prof. Widschwendtler has been hunting for epigenetic changes in the cells lining the cheek in the mouths of smokers and what they have found is astounding.  By looking at the epigenetic program of the altered cheek cells and comparing this program across 5000 tissue samples ranging from normal to pre-cancerous to cancerous tissues, the team was able to discriminate between normal and cancerous tissues with “almost 100% sensitivity and 100% specificity irrespective of the organ from which the cancer arose.”  Significantly, the epigenetic changes also appeared across cancers unrelated to smoking.  Moreover the presence or absence of the aberrant epigenetic program strongly affected the likelihood of pre-invasive cancers progressing to full on invasive forms.  Finally, their results demonstrated that the epigenetic damage to certain genes could be reversed, at least in individuals who had ceased smoking 10 years before the researched analyzed their cheeks.

Smoking will kill you, or so they say, Yet, a certain meme persists: ‘My grandfather smoked three packs a day since he was 10, he just turned 90 and is fit as a horse.’  It occurred to Morgan Levine and Eileen Crimmins that there was more to such proclamations in defense of smoking than a cultural anecdote.  Their recently published research reveals a set of individuals who appear highly resistant, if not immune, to certain environmental epigenetic hazards: long-lived smokers. Using statistical methods and the genetic information of long-lived smokers Levine and Crimmins were able to construct a “set of single nucleotide polymorphisms [SNPs] that together appear to be important for human aging, stress resistance, cancer, and longevity.”  The researchers noted that a primary risk of smoking is genetic damage and find it “likely that long-lived smokers possess variants which prevent genomic instability and allow them to survive to more extreme ages.”  These same mechanisms also appear to confer resistance to many cancers with epigenetic pathologies.

The research is ongoing, but thanks to smokers we are much closer to understanding not just how to beat cancer at its root but how to extend human life.  If the antis had been as successful as they would have liked, we wouldn’t have had enough smokers left around to figure this stuff out.  You need a pool of smokers to draw from in order to see the change.  No smokers, no epigenetic change.  No changes, no basis for comparison – and no new science.  So before you yell at that bastard in the atrium stealing precious seconds from your life consider, for a moment, that his choice will probably end up giving you the opportunity to extend your life at the expense of his.  Tell him thank you for smoking. 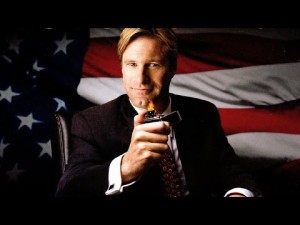 Previous Post: Of Miracles & Monoliths
Next Post: The new ‘Story Wars’: In this campaign, the Pessimists Party is battling the Optimists over the American self-concept